Coming Soon
Movies
Movies Based On

This true crime slash thriller, slash biography movie has all the makings of 2017’s best film inspired by a real event. It has barely been released, but it’s already stirring up quite a lot of attention among critics as well as regular cinema goers.

Very few of us would have heard of Barry Seal and Monty Schafer before the release of this film, but I’m sure that by the end of this 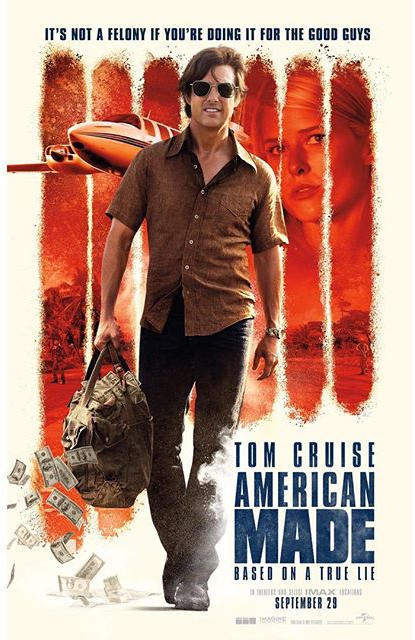 year they will be names as famous as Al Capone or Ted Bundy. The film covers their entire relationship, from the initial work Seal did for Schafer and the CIA, through the drug smuggling operations, conflict with other law enforcement agencies, and finally Seal’s prosecution and selling out of the druglords behind his work. The movie, unlike other tellings of true crime, covers the full story of Barry Seal, from how he came to be involved in drug smuggling to how he left it, with all the juicy details and even the bitter aftermath. It has a feel a bit like Gran Torino for how completely rounded the character’s identity is through his different developments in the story.

The entire film captures the humanity and reality of the situation without lingering on the elements that are a little more boring. Boring? Well, naturally if this story were thrilling from beginning to end it would be something we are all fully aware of thanks to crime shows. The actual story is much slower paced, involves much more paperwork, and a lot of other elements which, quite frankly, will lose our interest as an audience.

The script is masterfully written in that it develops the characters into more exciting personalities, highlighting the aspects of their identity which make them truly amazing. Fortunately for the writing, the creative license taken is likely to be overlooked or forgiven by most of us. In fact, we completely forgive it. This story is not really a meaningful part of American cultural consciousness, so it doesn’t bother us that they have changed some of the details. The important thing is that the story has finally reached audiences and touched our hearts.

The pace is kept just right for the film, skipping through the sections which would have naturally been more boring or repetitive and glamorizing the aspects of the story which were more naturally dramatic. The chance of scenes is timed perfectly to avoid jumpiness or drawn out scenes, and the narration really helps bring it together by condensing events and interactions where necessary.

The casting choices could not have been improved upon. Tom Cruise, after a long stint away from the powerful eye of Hollywood’s camera, is back in a leading role and he carries it beautifully. His representation of Barry Seal is light-hearted but profound, a terribly human person, who on some level we can’t help but relate to. Not in the sense that he inspires us to want to rush out and start smuggling drugs, but in the sense that we genuinely fear for Seal’s well being throughout the film. Every daring move he makes, every bold decision, every terrible run in he has, we were at the edge of our seats begging for him to make it through. This is, of course, a departure from Cruise’s more recent roles where he has been more polished, clean-cut, and sophisticated. But we love it.

If there is one complaint that we can’t help but raise, it’s that the story is a little samey. I’m not sure whether it is just the nature of these dramatic real life stories that they have to be similar – perhaps if they were not, the real live people who experienced them would be a little less alive? – or whether it’s the case that Hollywood can’t let a true story shine for its originality and methodically smothers all the unique, complex elements of these stories to package something a bit more generic. Which also raises the question: If it works, does it matter that it’s a little samey? Seriously, this film comes together so well, perhaps a bit of repetitiveness is the price we need to pay for a consistently gripping and thrilling film? After all, the complete opposite of American Made would probably have been an original… and a total flop too.

The verdict? It may be a bit similar to some of the other crime and thriller movies we have seen before, but if it ain’t broke, don’t fix it. This film telling the original tale of real life drug smuggler Barry Seal is a gripping event that is well worth the watch.